Russia Is Struggling To Replace Weapons Destroyed, Damaged In Ukraine 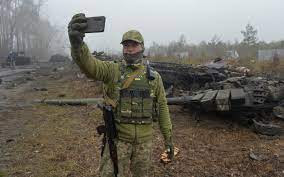 In two months, the Ukrainian military has destroyed two years worth of Russian tank and other military hardware production.

And Russia is struggling to replace them because sanctions have limited its ability to import new systems and components while its history of poor maintenance means replacement stocks are limited. The result is that it is running out of equipment - and the economic impact is significant because arms exports were a major source of foreign currency for Russia. All of which may be why NATO officials, seeing its vulnerability, are increasingly calling for a redoubled effort to assure that Russia is beaten so severely that it will not pose a global threat for years. JL

Russia’s heavy use and loss of weapons in Ukraine, combined with severe Western sanctions, will crimp its military might and lucrative arms exports for years, hindering its ability to produce everything from new weapons systems to spare parts for existing armaments. Russia has also lost 3,000 pieces of large equipment in battle including 500 main battle tanks, 300 armored fighting vehicles, 20 jet fighters and 30 helicopters. That means Ukrainian forces in two months have destroyed the equivalent of at least two years of Russian tank production.

Russia’s heavy use and loss of weapons in Ukraine, combined with severe Western sanctions, will crimp its military might and lucrative arms exports for years, hindering its ability to produce everything from new weapons systems to spare parts for existing armaments.

Now in the ninth week of what was envisioned as a quick military operation, Russia has deployed large parts of its arsenal, including some of its most modern equipment. It has fired vast numbers of missiles, rockets and artillery shells and cut deep into supplies of newer, precision munitions, say analysts.

Russia in recent years has produced around 250 tanks and 150 aircraft annually, according to Mark Cancian, a senior adviser at the Center for Strategic and International Studies, a think tank in Washington. That means Ukrainian forces in two months have destroyed the equivalent of at least two years of Russian tank production.

The U.S. believes Russia overall has lost roughly one-fourth of the combat force it initially had to invade Ukraine, a senior Pentagon official said last week, without providing details. The Russian Defense Ministry didn’t respond to a request for comment.

For now, Russia’s invasion forces can resupply from enormous equipment reserves, so the depletion is unlikely to affect the war’s course quickly. Russia’s official equipment rosters include tens of thousands of military land vehicles. But many require maintenance or repair, and a large portion are likely not operative and can be used only for spare parts, say analysts who track Russia’s military. How many older vehicles can actually be deployed is unknown.

If the war drags on for months, consumption and destruction of Russian materiel, coupled with Western financial sanctions and export restrictions, will impede Moscow’s capacity to provision forces with better equipment, analysts say. Russian defense contractors will similarly struggle to meet demand from both Moscow and export customers, or to invest in research and the development of new products, say Western officials and analysts.

“Our sanctions have pulled back the military-industrial complex of Russia, and it’s not coming back any time soon,” said U.S. Deputy Secretary of State Wendy Sherman in Brussels on Thursday. Russian Deputy Prime Minister Yury Borisov said last month it was difficult to assess the impact of sanctions on Russia. “The goal of completing state orders was and remains a priority,” he said.

The Kremlin hasn’t confirmed the scale of equipment losses or how it plans to replenish its forces. Among the most significant losses it has confirmed is the sinking of the cruiser Moskva, the flagship of its Black Sea Fleet, which Ukraine claims to have hit with missiles. Russia says it sank while being towed during a storm.

Russia, and previously the Soviet Union, built military strategies based on huge quantities of fairly basic weapons to overwhelm adversaries. Moscow at times has appeared ready to suffer big losses to achieve its goals, analysts say, relying on its stockpile of mostly Soviet-era weapons and many of the components needed to manufacture them. The approach contrasts with the West, which has focused on developing fewer but superior weapons that can better survive battle.

Replacing Russia’s lost modern combat jets and helicopters would cost hundreds of millions of dollars, and Western sanctions are designed to impede resupply.

Even less-sophisticated land vehicles could pose a replacement challenge for Russian defense companies, which haven't extensively modernized production systems since Soviet times and still rely heavily on now-sanctioned foreign equipment, machine tools and precision components such as electronics and bearings. Russia’s military-industrial sector has shrunk from its Soviet scale, further complicating a production surge like during World War II.

While sanctions and industrial bottlenecks are unlikely to quickly affect battlefields in Ukraine, they could if the war grinds on.

“The real test for the industry regarding inputs probably will occur in the coming months or in next year” as stockpiles of components with sanctioned content get depleted and Russia runs low on foreign-made microchips now used in most military hardware, said Tomas Malmlof, a senior military analyst at the Swedish Defense Research Agency.

Defense-manufacturing problems that hit exports would weaken Russia’s economy, which has been battered by the unprecedented sanctions. Russia is the world’s second-largest weapons exporter behind the U.S., and arms are among Russia’s largest exports aside from natural resources, which dominate the country’s economy. Russia exports arms to over 45 countries and has accounted for around 20% of global arms sales since 2016.

Hurdles even impede Russian defense exports that don’t rely on foreign inputs, due to sanctions imposed on Russia’s banking system. State-owned arms manufacturer Almaz-Antey said last month it was unable to receive roughly $1 billion in payment from clients, including India and Egypt, and urged the Russian government to help military companies by developing systems to process foreign transactions.

“Right now, because of the imposed sanctions, the processing of payments has stalled,” Almaz-Antey finance director Rustam Ulumbekov told Russia’s TASS news agency. “And the sums are colossal.” Almaz-Antey didn’t respond to a request for comment.

In March, Russia’s largest tank manufacturer, Uralvagonzavod, said it was furloughing some workers. A representative of its trade union said that the enterprise, which is under U.S. and European sanctions, was struggling with shortages of parts for components such as cartridge bearings, which it could no longer source from suppliers in Sweden and elsewhere because of sanctions.

“There’s no problem with the number of orders. There are problems with their fulfillment,” union official Aleksandr Ivanov told the news outlet Ura.ru.

Mr. Ivanov told The Wall Street Journal in a recent interview that Russia is now emphasizing import-substitution efforts that will allow it to replace even the scarcest parts.

“They’ll find a way to fulfill defense contracts,” he said. “This is a huge responsibility toward the state.”

Component stockpiles offer a buffer, he said. “We have a strategic surplus, going back decades.”

After the Soviet Union’s collapse in 1991, Russia imported many Western weapons systems and components. In 2015, after the West imposed sanctions over Moscow’s seizure of the Crimean Peninsula from Ukraine and its support for separatists in eastern Ukraine, the Kremlin launched a program to replace imports, ordering a renewal of its “military-industrial complex on a new technological basis.” It said imports would be replaced in 826 types of weapons and military equipment by 2025.

Russian President Vladimir Putin at the time told his Military-Industrial Commission that “import substitution in the defense industry is a serious challenge that managers, engineers, designers, entrepreneurs and scientists must answer.”

Since then, Russia has been unable to put into mass production some of its most advanced and highly touted new weapons systems, including Sukhoi jet fighters, the T-14 Armata tank and the A-100 airborne early warning jet. Delays are due to production problems and sanctions, Russian media have reported.

Why do you think Russia’s military has underperformed expectations? Join the conversation below.

“When their weapons are being shown to be blown up all over the place, there’s a general perception that maybe this equipment isn’t that good,” he said.

A hit to defense exports would hurt Russia beyond just denting its trade balance. Arms-exporting countries and companies rely on foreign sales to subsidize the development and production of new weapons systems for their home militaries. If Russian arms can’t generate export revenue, Russian producers might struggle to innovate and remain competitive in the fast-modernizing sector.

“Russia is heavily dependent on exports to reduce their cost of weapons development,” said John Parachini, a senior international and defense researcher at Rand.

Spare parts could pose another problem for Russia’s military, since even noncombat military operations quickly wear through gear. Soviet industry focused on achieving production targets of finished products, from shoes to fighter planes, with less attention paid to ongoing support for the products. Post-Soviet Russia’s defense industry has improved only slightly, say people who have worked with Russian factories.

For parts worn out in Ukraine, “being able to replace them is a protracted operation,” said a former American military official with more than two decades of experience working with Russian military equipment, who didn’t want to be identified. “They have never manufactured spare parts like we do.

A scramble for replacement parts could also hurt exports to Russia’s top foreign buyers, including India, Vietnam and Egypt.

“If some of the biggest purchasers of weapons from Russia worry they can’t get spares, they will develop their own indigenous systems…or shift to other countries,” said Mr. Parachini at Rand.