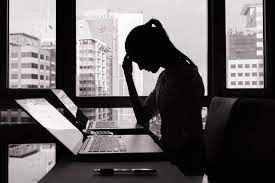 The data from recent surveys suggest that those being forced to return to the office are twice as likely to suffer from stress and anxiety which, based on earlier research, means their performance likely suffers as a result.

Those who are permitted hybrid or remote work options have much higher work-life balance, which will also be reflected in their productivity and other measures of job-related attainments. JL

Non-executives are nearly twice as likely as top managers to work from the office every day, and their work-life balance scores are now 40% worse than executive respondents. Workers also reported more than twice the level of stress and anxiety as top bosses. There was also a sharp divide between the employee experience scores of workers who have full-time in-office mandates and those who have hybrid or remote options, with declines twice as steep for full-time office workers when it comes to work-life balance and 1.5 times as steep for scores on stress and anxiety.

s the pandemic threat recedes and more employers call workers back to the office, new data from a survey of 10,000 workers describes a “troubling double standard” in the realities that employees and their bosses face, with non-executives showing much steeper declines in measures of work-related stress, anxiety and work-life balance.

Future Forum, a research consortium on the future of work launched by Slack and other partners, released on Tuesday its latest Pulse survey of 10,000 knowledge workers globally. The consortium, which also spearheads a working group of executives to discuss future workplace issues, found that non-executives are nearly twice as likely as top managers to work from the office every day, and their work-life balance scores are now 40% worse than executive respondents. Workers also reported more than twice the level of stress and anxiety as top bosses.

There was also a sharp divide between the employee experience scores of workers who have full-time in-office mandates and those who have hybrid or remote options, with declines twice as steep for full-time office workers when it comes to work-life balance and 1.5 times as steep for scores on stress and anxiety, the survey found.

“Executives are embracing flexibility while they're telling everybody else to come back to the office,” says Future Forum vice president Sheela Subramanian. “What we're seeing is just a lot more rigidity, more top down mandates happening and executives are not necessarily setting that model from the top.”

Meanwhile, Subramanian says, the overall declines in employee experience scores since its research last quarter come as some companies are requiring workers to revert to pre-pandemic approaches to office attendance. The new survey found that 34% of knowledge workers have gone back to working in the office daily, the largest share since the consortium began its research in June 2020.

Yet recent weeks have seen a wave of companies launch their hybrid returns to office, with many introducing policies that range from a few days a year to a few days a week onsite. At Overstock.com, most workers’ in-office mandates will be limited to a few days in the spring and late summer. Apple is easing workers in with a requirement of one day a week, which will grow to three days a week starting in May. Google has also said it expects workers to be in the office three days a week.

At Hewlett Packard Enterprise, which officially reopened its offices April 4, about 80% of its workforce is designated as hybrid, with no mandate for the number of days they should be in the office. These employees, as HPE CEO Antonio Neri wrote in a recent blog post, will be “working primarily remotely but encouraged to come into the office for collaboration.”

The company’s chief people officer, Alan May, says that HPE is doing more to articulate when those collaboration times might be. For instance, the tech firm asks leaders to meet with their employees every couple of months for targeted career, strategy and performance-metric discussions.

“We’re encouraging all of those to occur face-to-face where possible, in the office,” May tells Forbes. Collaboration events, meetings with customers and meetings designed to recognize workers should also be done in person, he says. Yet at the same time, there’s “certainly not an edict or a quota on the number of days people have to show up,” he says.

Still, May says, they’re trying to make the office a draw, with a new headquarters in Houston that includes make-at-home meal kits to take home, large outdoor screens for movies, onsite health and fitness facilities and a pop-up “makerspace” with equipment like 3-D printers for workers to dabble in their own projects or attend workshops with peers.

Of the “makerspace,” May says, “it's an additional amenity that I think, frankly, is a lot more thoughtful than just another foosball table.” People are excited to be back on the new campus together, but that doesn't mean “they suddenly jumped back in five days a week,” he says. “I think those days are gone.”

Future Forum’s Subramanian agrees being flexible doesn’t necessarily mean there’s no role for the office. Despite all the focus on where people will be working, their new survey showed that when employees are expected to work may be even more important to workers than where. While 79% of respondents say they want location flexibility, 94% say they want to be able to choose the hours they work.

When making plans for coming together in person, she says, companies should create team-level agreements for a set of core hours and be “really intentional about why you're getting together—rather than ‘you need to come into the office so I know that you're working and responding to my messages quickly.’”

“Intentional” is exactly the word Scott Farquhar, Atlassian’s cofounder and No. 123 on our 2022 billionaires list, used when describing his software company’s strategy recently. In an interview with Forbes, Farquhar said details are still being hammered out, but he expects the direction to be that employees who don’t live near one of the company’s offices will travel about four times a year for what he calls “intentional togetherness.”

At Atlassian, the company allows people to work anywhere as long as three criteria are met: They’re legally allowed to work there, the company is legally allowed to employ them in that location, and the time zone works for their team, wherever people are based. Farquhar said about 10% of the company’s U.S. employees have moved states over the past 18 months, and 44% of its new hires in the U.S. in the past year live two or more hours from one of its main office locations.

Subramanian says it’s critical for companies with hybrid policies to set “behavioral guardrails,” as it’s “very easy for things to become inequitable.” That goes for executives, too. Ben Langis, head of workplace of the future at State Street, which has announced a hybrid work plan, says the giant asset manager has asked senior leaders to model the expectations it has for employees around working hybrid, and offers managers training on this new approach to work. “Everyone has to realize this is a large social experiment,” Langis says.

At Atlassian, where its Trello team has always had a remote-first approach to Zoom calls, if one person is remote, everyone else is join calls that way, too. That includes Farquhar: He once flew in from Australia for a town hall meeting at Trello’s offices but conducted it from a phone-booth sized room since some employees were dialing in remotely.

“I call it the Brady Bunch mentality,” he says. “Everyone has their own little box.”