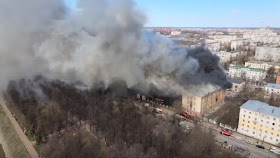 Probably not a coincidence...

The three most likely explanations are: Ukrainian saboteurs; internal Russian opponents of the war who are trying to stop their own institutions from contributing further to it; faulty wiring. The last is certainly plausible - and may have even figured in the plans of either Ukrainian or internal saboteurs. But the larger message is that opponents of the Putin regime, both internal and external, could be beginning to attack the Russian homeland. JL

At least five people have died and dozens more were injured in a fire at a Russian Defense Ministry research institute near Moscow (which) is involved in development of some S-series surface to air missles and Iskander ballistic missiles. The fire could not be extinguished for four hours despite the use of helicopters. (Also) Dmitrievsky Chemical Plant burned down today. This is the largest Russian manufacturer of chemical solvents.

At least five people have died and dozens more were injured in a fire at a Russian Defense Ministry research institute near Moscow on Thursday, the state-run TASS news agency reported, citing regional emergency services.

Video footage shows plumes of dark smoke rising from the Aerospace Defense Forces’ Second Central Research Institute in the city of Tver some 150 kilometers northwest of Moscow. The 1,500-square-meter fire started on the second floor and ripped through the building’s upper three floors, forcing people inside to escape by jumping from windows.

“A total of five people died. Twenty-five were injured,” TASS quoted its source in the Tver regional Emergency Situations Ministry as saying.

The regional emergencies ministry said firefighting crews have been deployed to the scene and that there was no risk of the fire spreading to other buildings.

Dmitrievsky Chemical Plant burned down today on the outskirts of Moscow. This is the largest Russian manufacturer of chemical solvents. Located 250 miles EAST of Moscow. We are beginning to see a pattern develop.