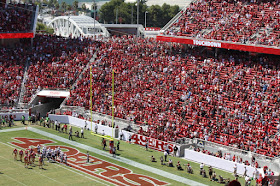 Start with the fact that the Super Bowl is the televised event which annually attracts the largest viewing audience in the world. Then add that it is the 50th anniversary of the game, making it even more special. And as if that weren't enough, the game will be played this year at a stadium in the heart of Silicon Valley - and which thus has enhanced internet communications as one of its features.

Yes, anyone looking for attention would certainly have to be thinking about the trifecta of American sports, California - and technological vulnerability. JL

In previous tours of the stadium, officials have touted how good the wireless technology is. Last year, during a tour of the empty stadium, I was able to get a Wi-Fi connection with a speed of 28MB per second downstream and 47MB upstream on my iPhone.
Comcast Business brings the Internet into the stadium, using multiple paths for redundancy. The fiber-optic cables provide Comcast Business VoiceEdge, a cloud-based service that uses the Internet to provide both data connectivity and voice communications over the same unified network.
Comcast has wired the place with multiple 10GB Ethernet networking cables (combined into 40GB-per-second bandwidth), bringing a total of 400 miles of fiber-optic cable into the stadium. At any given spot, you can access super-fast Wi-Fi, thanks to 1,200 routers within the stadium itself (600 of them placed above and under the seats).
Clearly, if terrorists targeted fiber-optic cables in the region, it would severely limit the ability of the 68,500 people in the stadium to take selfies during the game and post them to their social networks. (That’s half the fun, right?)
Separate FBI records reviewed by NBC showed that at least 10 fiber-optics cables were deliberately severed between July 2014 and June 2015, and Michele Ernst, a spokesperson for the FBI’s San Francisco field office, told NBC that there have been 15 attacks against fiber-optic lines in the region since 2014.
Drones could pose a variety of threats. One relatively benign threat would involve drones unlawfully broadcasting images from inside the stadium. A more serious threat would involve the risk of injury if the operator lost control of a drone in a crowded venue. Worse would be if a perpetrator somehow used a drone to carry out an attack, the authorities said.